For all of you going to Pack Expo, please visit us at the Open House we are holding at our Las Vegas manufacturing facility – just 20 minutes off the strip. We will be displaying our newest innovations and will be indulging in food from a caterer voted the BEST IN LAS VEGAS BBQs. There will also be an open bar for your enjoyment.

Shuttles (party buses!) will be available to and from the BBQ. The first shuttles leave at 10:30 departing from the Convention Center – door #9. This is the main entrance of the Convention Center near the cab lines. Spotters will be on hand to assist you in finding the buses. Passenger vans will also be available to assist those who need to depart from a different location. Please contact your Sales Rep for coordination. 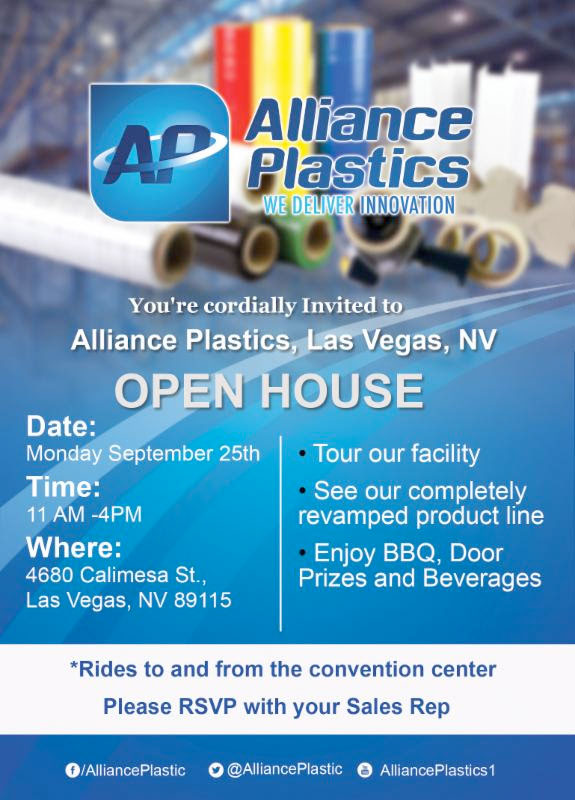 Resin has moved up quickly as new offers on the spot buy market have been going fast and at much higher pricing. The hurricane that hit Houston has caused a logistical nightmare and many resin suppliers have declared force majeure.
I can’t say the hurricane didn’t have a heavy toll on the people of Houston and beyond, but let me make this statement, resin manufacturers will not waste an act of God. They have implemented the 3-cent increase for September and will push the 4-cents through for October. If you were waiting to buy, you may already be too late. The issue is now about the supply and the logistics involved in getting the railcars moving.

More good news to report – paper continues to move higher but I have not been given increases that force me to move. I am still playing hide and go seek with my suppliers because I am afraid to ask. Last time I asked, I was scolded for not buying enough but not given incentive to buy more!

I then was told to go stand in the corner and think about what I asked for and not to come out until I was ready to stop asking for ridiculous pricing.

I recently had a chance to go to a special viewing of Ken Burn’s documentary on Vietnam which premiered on PBS, September 17, 2017. My Father served 3 tours in Vietnam and participated in the invasion of Cambodia. The beginning started with that provoking sound of the helicopters and the rotors, it’s a sound everyone in the military knows so well. That sound grabs your soul and made me immediately hyper aware. I found myself surrounded by veterans from the Vietnam War and I could see the grim expressions in that dark room. You could almost feel the emotions sweeping over them.

My Father never spoke much about the war. In fact, most of the stories I have heard about my Father during the war were relayed from people that served with him. He was different than many of the other soldiers that were drafted and whom entered the military involuntarily. Dad had a different perspective, he was a professional soldier and joined the army in 1958. By the time he was in Vietnam, he was older than most of the young draftees. He was already decorated for combat in the Dominican Republic and he also was an advisor in Vietnam before the larger combat operations were assumed by the United States.

My father didn’t look like the draftees, he wore his clothes differently, he was clean shaven and the one thing I noticed, he had steely confidence in his eyes and not the shell shock you see in so many of those poor veterans you see in old photos. I know he missed his family back home, but he had a strong allegiance to his country, to his command and to his men that often took precedence over a young wife with three children.

My poor Mother would tell me what it was like, living in an area where she didn’t have a mastery of the English language. She watched TV daily to see any glimpse or hope that our father would return. She lived off the letters and once monthly phone call he was given to us to remind us he was alive. The worst job in the military wasn’t tunnel rat, river rat or grunt; it was and always will be, army Spouse.

I asked my Father why he kept going back to Vietnam. He told me with all the truth in his heart, “If I went back, I hoped that more boys would come back home with me”. When I took my dad to the Vietnam War Memorial, he looked up names and touched each one of them. He cried, which I had never seen before. I wish I could tell you he only looked up a handful of names, he did not, we were there for a while as he touched so many a young man’s name who gave the ultimate sacrifice. I sat and wondered, as he was always a strong image to me growing up, I wondered if he cried when he was all by himself and sure no one would see him.

Dad passed away during PMMI in Chicago in 2004. Many of you came to his funeral, and so many of you sent me your regards. It was amazing how many people my father touched outside of the military. We joke here at Alliance that his ghost still haunts us today and that his principals and lessons still linger. My father died from multiple myeloma, a cancer that is attributed to the many years of his exposure to agent orange. When I spoke to one of his army buddies, he said to me, “That damn wall isn’t complete yet. I wonder how many others should be etched on the wall”. My dad wouldn’t complain though. He told me that agent orange saved his life and allowed him to come home to his family. Though he always carried great burden of guilt that all those that served with him that didn’t get that same luxury.

He served 31 years and he would say his greatest accomplishment was the family he raised. Growing up, Dad and his army buddies would carry their burden silently together and continue to move us from duty station to duty station all over the world. For me, Vietnam has been an ever-present theme in my life.

Dad once told me that the scariest words ever spoken in the army is, “Fix bayonets.” I asked him if he ever said those words or heard them. He told me with only a one-word answer, “yes”. When he was diagnosed with PTSD and given anti-depressants, I wondered what images were in his head. What ghosts were chasing him and what did he see in the shadows that made him jump? His gambling, drinking and insomnia were not mysteries for me, but dad would never place blame on that reoccurring theme of war from my childhood.

He and all those other brave heroes who came back to a nation that couldn’t separate the warrior from the war, and many who wanted to pretend that nothing was happening outside their small towns. For all those brave warriors, they now are getting the well-deserved recognition of a grateful nation. The wounds that are physical that are seen often are not as deep as the wounds we can’t see. To that, we should give them the resources they need to help them fight their present battles, and for that I would say, “FIX BAYONETS”.